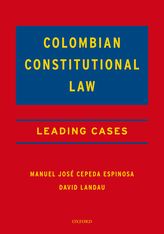 This book makes available the case law of the Colombian Constitutional Court in English, which has become one of the most creative and important courts of the global south and the world since its creation in 1991. It provides concise and carefully chosen extracts of the Court’s most important cases, along with notes and introductory materials to place them in a historical and comparative context. The book covers the Court’s landmark rights jurisprudence, including the decriminalization of drug possession, the legalization of same-sex marriage, the protection of social rights through broad structural orders such as the ones covering internally displaced persons and the right to health, the protection of the rights of indigenous peoples to cultural autonomy and to be consulted before economic projects are undertaken on their land, and the rights of victims of the country’s long-running internal armed conflict to truth, justice, and reparations. It also covers the Court’s most noteworthy structural cases, particularly its successful attempt to limit the use of states of exception and its substitution of the constitution doctrine. The materials highlight the Court’s contributions in a comparative perspective, showing how they are exemplary of a range of problems faced by courts around the world and particularly as an example of aggressive judicial review by the courts of the global south. At the same time, they demonstrate how many of the Court’s key cases are reactions to the historical features of the Colombian legal and social landscape.