(b. Philadelphia, Pa., 10 Aug. 1843; d. Washington, D.C., 21 Nov. 1926; interred Mount Olivet Cemetery, Washington, D.C.), jurist, associate justice, 1898–1925. He was the son of an Irish immigrant baker, John McKenna, and his wife, Mary Johnson. McKenna is portrayed as a living embodiment of the American Horatio Alger myth, rising from poverty to a seat on the highest court in the land. His Irish forebears came to Philadelphia with the famine migration.

In 1855 the family moved to Benicia, California, where, during the few years remaining to him, his father’s lot improved steadily. Educated in parochial schools, McKenna initially planned to enter the Catholic priesthood, but turned instead to the law. After admission to the California bar in 1865, he practiced in Solano County, where he won election to two terms as district attorney (1866–1870), and one term in the state legislature (1875–1876). In 1869 he married Amanda F. Borneman of San Francisco, the mother of his son and three daughters. 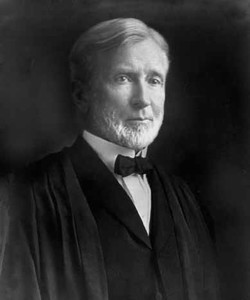 Like so many of his day, McKenna used the legal profession as a stepping stone to a successful career in politics. Fixing his sights on the national level, after suffering a series of defeats, finally, in 1885 he won election to the U.S. House of Representatives, where he served four terms as a Republican from California’s third district (1885–1892). In Congress he displayed those characteristics that identified him as a loyal party man. He introduced private members’ bills for railroad magnate Leland Stanford, and supported the extension of California land grants. He showed himself to be adept at getting pork barrel legislation for his home constituency passed, including a $400,000 appropriation for improving harbor and port facilities in the San Francisco Bay Area.

He resigned his House seat on 28 March 1892, when President Benjamin Harrison named him to the Court of Appeals for the Ninth Circuit with the support of Stanford, by then U.S. senator from California. After winning a resounding electoral victory in 1896, President William McKinley, with whom McKenna had served in the House, established western geographical representation by appointing his old friend attorney general. McKenna held that office for only a few months until 16 December 1897, when McKinley elevated him to the U.S. Supreme Court to succeed Justice Stephen *Field.

(p. 626) McKenna’s confirmation by the Senate was delayed for about five weeks as the result of opposition from rival Pacific railway systems, feuding at that time with the Stanford network. The Senate finally voted to confirm him on 21 January 1898 without a formal roll call, and McKenna took his seat that same month. McKinley only named one appointment to the Court during his four and a half years in office, but his selection of a long-time friend and former colleague gave him, and others, particular pleasure.

Stanford remained McKenna’s chief patron, and once on the Court, McKenna wrote opinions protecting Stanford’s railroad interests, in particular his powerful Southern Pacific Company, from state and local attempts to regulate rates and the use of terminal facilities. But within a short time, even the railroads were ready and willing to accept some federal regulations to shield them from crippling rate wars and conflicting state laws. For his part, McKenna later wrote a number of opinions upholding the *Interstate Commerce Commission’s statutory powers with respect to fact gathering and rate-making.

McKenna served under three chief justices for almost twenty-seven years, one of the longest tenures of any Court justice. He concurred in a small number of majority opinions among the more than 633 he wrote while on the bench, and in the early years, many of them were verbose, bewilderingly complex, and studded with numerous established precedents. He served during a period when the Court decided some very important cases, and for a few he wrote the majority opinion. These opinions have had long-lasting effects. Over time he overcame his penchant for verbosity and gained a better grasp of the responsibilities of an associate justice, but he was never able to develop any recognizably consistent legal philosophy, not an altogether unusual occurrence in the Court’s history.

McKenna’s decisions are noted for strengthening the effectiveness of the Interstate Commerce Act (1887) and expanding the newly created federal *police power. They robustly supported congressional efforts to regulate new areas of the nation’s economic and social life under the Commerce Clause. If his position on railroad rate-fixing seemed to be in conflict with his earlier opposition to the establishment of the Interstate Commerce Commission, it only serves to underline a certain erratic strain in his decision making, frequently resulting in contradictory findings.

For a unanimous Court, McKenna wrote the opinion on Hipolite Egg Co. v. United States (1911), sustaining the validity of the Pure Food and Drug Act of 1906. In an earlier1903 case, *Champion v. Ames, he joined the majority in an opinion that established the foundations of a national police power regulating commerce by excluding from interstate traffic supposedly harmful goods (in this case, lottery tickets, but later, liquor, drugs, and the white slave trade). These two rulings established him as pursuing a more consistent line of decisions, using a broad interpretation of federal *commerce power. In Hipolite, he ruled that although Congress could not directly prevent the processing of adulterated foods, it could prohibit the transportation of such foods in interstate commerce.

In 1913 the Court gave further support to the growing body of federal police power legislation when it upheld the *Mann Act, prohibiting the interstate transportation of women for immoral purposes (the so-called white slave trade), whether for commercial purposes or otherwise. In Hoke v. United States (1913), McKenna wrote, “If the facility of interstate transportation can be taken away from the demoralization of lotteries, the debasement of obscene literature, the contagion of diseased cattle or persons, the impurity of food and drugs, the like facility can be taken away from the systematic enticement to and the enslavement in prostitution … of women, and, more insistently, of [young] girls.”

In 1920 McKenna wrote for the majority in United States v. U.S. Steel Corporation, in which he declared that the Sherman Act (1890) did not prohibit the mere existence of the power to dominate an industry. In a 5-to-3 decision, the Court ruled that in the absence of some overt action to the contrary, it could be assumed that a corporation was acting “reasonably.” In other words, the unconcealed monopolistic tendencies of U.S. Steel were “reasonable,” thus expanding the “rule of reason “doctrine. In *Hammer v. Dagenhart (1918), McKenna remained consistent, joining Justices Oliver Wendell *Holmes, Louis *Brandeis, and *John Clarke in their dissent, which included a vigorous criticism of the doctrine of *dual federalism. Proponents of this doctrine argued that the *Tenth Amendment in the *Bill of Rights created a dual system of sovereignty in which both the powers of the states and of the federal government were separable, and in their respective spheres inviolable. The dissenters refused to turn their backs on logic, history, and working children, and supported extending federal power over the regulation of child labor. The majority, however, upheld the power of the states, in spite of earlier decisions in which they had upheld federal police power.

In other cases, McKenna demonstrated that he was less supportive of state regulation that allegedly inhibited freedom of contract. Accordingly, he voted with the majority in *Lochner v. New York (1905) and *Adkins v. Children’s Hospital (1923). Some of McKenna’s later opinions (p. 627) were characterized by practicality, the application of common sense, logic, and a greater clarity of expression. Overall, his performance while on the Court was a respectable one, this despite the dire predictions that had preceded his confirmation.

In his later years, McKenna’s mental powers began to deteriorate, but when he was at his best, his jurisprudence was infused with a strong nationalism, moral vigor, and sound reasoning. Failing to recognize or admit the effects of advancing age, he remained on the Court beyond his time. His colleagues, aware of his failing abilities, privately agreed in November 1924 to postpone decisions in those cases in which McKenna’s vote would be crucial. After considerable prodding from Chief Justice William Howard *Taft, McKenna finally retired from the bench on 25 January 1925, and after an illness of several months, he died on 21 November 1926 in Washington, D.C. The other justices were pallbearers at his funeral.