(b. Richmond, Ky., 5 April 1816; d. Washington, D.C., 13 Oct. 1890; interred Oakland Cemetery, Kelkuka, Iowa), associate justice, 1862–1890. Samuel Miller, appointed by President Abraham Lincoln in 1862, helped shape the Supreme Court’s early interpretation of the Civil War Amendments, particularly the *Fourteenth. A product of antebellum mid-western antislavery politics, Justice Miller developed a moderately conservative jurisprudence of the Fourteenth Amendment as the author of the Court’s majority opinion in the *Slaughterhouse Cases (1873). He served on the Court until his death in 1890. 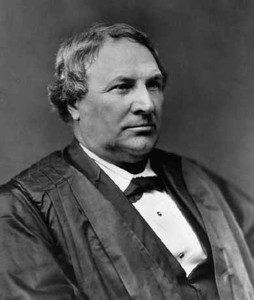 Miller was the son of Frederick Miller, a farmer, and Patsy Freeman. The future justice initially trained as a physician, earning a medical degree in 1838 from Transylvania University. He married Lucy Ballinger in 1839 (d. 1854) and Elizabeth Winter Reeves in 1857. After a decade-long medical practice, Miller taught himself the law. He was admitted to the bar in 1847. Active in antebellum politics, Miller’s early sympathies lay with antislavery Whig candidates. As proslavery sentiment increased in Kentucky in the late 1840s, Miller moved to Iowa, a state considerably more hospitable to his emancipationist views (see slavery). Miller was active in Iowa Republican politics and supported Lincoln’s presidential candidacy in 1860. Lincoln in July 1862 appointed Miller to the Court.

Miller’s early voting reflected his strong commitment to the Union. During the *Civil War, Justice Miller voted to sustain Lincoln’s decisions to suspend *habeas corpus and to try civilians by courts-martial. After the war, Miller voted to uphold the constitutionality of loyalty oaths required of former Confederates seeking to hold office.

Miller left his most enduring mark on the Court’s constitutional jurisprudence through his reading of the Fourteenth Amendment. As the (p. 636) author of the majority opinion in the Slaughterhouse Cases, Miller limited the effectiveness of the amendment’s *“privileges and immunities” clause as a vehicle to protect individuals against state deprivations of rights. In the opinion, Miller articulated the view that the Fourteenth Amendment was meant to provide former slaves a measure of equality before the law with whites, not to expand the liberties of the general population.

Like the majority of the Court in the 1870s and 1880s, Miller steered a middle course in interpreting the Fourteenth Amendment. He viewed the amendment as prohibiting state-sponsored racial discrimination, but he generally refused to recognize its other guarantees. Miller voted with majorities in United States v. *Cruikshank (1876) and the *Civil Rights Cases (1883) to curtail federal efforts to combat private discrimination under the Fourteenth Amendment. Miller took a somewhat broader view of the *Fifteenth Amendment, concluding for a unanimous Court in Ex parte *Yarbrough (1884) that that amendment gave Congress the power to protect black voting rights against private interference.

Consistent with his limited view of the Fourteenth Amendment, Miller favored granting states wide latitudes in the regulation of business. He also saw the necessity for greater use of the Commerce Clause to achieve uniformity in federal regulation, a position reflected in his opinion in *Wabash v. Illinois (1886) that held that an Illinois statute on rate discrimination interfered with interstate commerce (see commerce power).

Miller did not completely abandon politics while on the Court. He, along with Justices Nathan *Clifford, Stephen J. *Field, Noah *Swayne, and Joseph *Bradley, served on the electoral commission that counted the electoral votes in the disputed Hayes-Tilden election (see extrajudicial activities). President Ulysses Grant considered elevating Miller to *chief justice before turning instead to Morrison R. *Waite. In the 1880s Miller was considered by some Republican party leaders as a potential presidential candidate. Throughout his tenure on the Court, Justice Miller’s jurisprudence was characterized by a pragmatic concern for preserving what he viewed as necessary governmental powers.