(b. New York, N.Y., 9 Mar. 1820; d. 7 July 1893, Newport, R.I.; interred Greenwood Cemetery, Brooklyn, N.Y.), associate justice, 1882–1893. Samuel Blatchford is remembered for his quiet tenacity and close attention to the intricacies of *patent and *admiralty law. Blatchford was an unassuming centrist who played a pivotal role on the Court in the early 1890s. He wrote the important majority opinion that marked the first clear use of substantive *due process, but two years later he also wrote the majority opinion that proclaimed that federal judges ought to use this new constitutional scrutiny of state regulations only in severely limited circumstances. 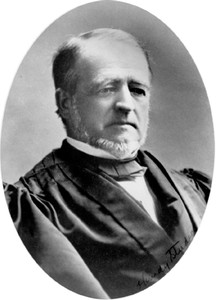 Blatchford, the son of Richard M. Blatchford, a prominent Whig lawyer and legislator, and Julia Ann Mumford, entered Columbia University when he was thirteen years old and graduated at the head of his class in 1837. He read law in the office of Governor William H. Seward and served as Seward’s private secretary before joining his father’s prestigious Manhattan legal practice in 1842. After Samuel married Caroline Appleton of Lowell, Massachusetts, in 1844, he moved to Auburn, New York, where he joined Seward’s law practice and served in several state legal posts. In 1854, he returned to New York City to practice law and was soon offered, but declined, an appointment to the state supreme court.

Blatchford built a considerable reputation for diligence not only as a lawyer but also as the publisher of admiralty decisions and the decisions of the Circuit Court of the United States for the Second Circuit. Andrew Johnson in 1867 appointed Blatchford a federal district judge in the Southern District of New York and President Rutherford B. Hayes in 1878 elevated him to the circuit court. When Ward Hunt resigned from (p. 92) the Supreme Court in 1882, President Chester A. Arthur failed to convince either Roscoe *Conkling (whom the Senate had confirmed) or Senator George F. Edmunds of Vermont to accept the post. Arthur then appointed Blatchford, who was quickly confirmed, taking his seat on 13 April 1882.

In his two best known opinions, Blatchford held that it made a constitutional difference whether state legislatures made regulatory decisions themselves or delegated power to do so to agencies or commissions. In *Chicago, Milwaukee and St. Paul Railway Co. v. Minnesota (1890), his majority opinion explained that the Constitution required the Court to strike down a Minnesota law that established an independent commission with the final say as to whether railroad rates were “equal and reasonable” (see rule of reason). This decision had great significance because it clearly departed from the Court’s earlier deference to state economic regulation, as in *Munn v. Illinois (1877), in which the business being regulated was said to be “affected with the public interest.” In *Budd v. New York (1892), Blatchford again wrote for a divided Court. This time, however, his opinion upheld state power to regulate businesses, such as grain elevators, at least when the state legislature itself set rates.

Many observers argued that the distinction Blatchford attempted did not make sense, and certainly should not make a constitutional difference. Owing in part to the rise of populism, a severe economic depression, and the charged atmosphere of the early 1890s, Blatchford’s attempt to find and hold a solid center was strained at best. This may help explain the relatively restrained praise for Blatchford after his death. Seymour D. Thompson, the outspoken editor of the American Law Review, proclaimed, “It is no great disparagement of him to say that he was probably a better reporter than judge.” During the Court’s formal memorial service Attorney General Richard Olney said of Blatchford, “If he was not brilliant, he was safe.”

However, Blatchford’s lawyerly enthusiasm for procedural detail contributed to his significant civil liberties decision extending the *Fifth Amendment privilege against self-incrimination in *Counselman v. Hitchcock (1892). Blatchford’s ruling for a unanimous Court emphasized that the Fifth Amendment protected Counselman from giving evidence that could be used in “any criminal case,” including a grand jury proceeding. Blatchford was explicit about moving beyond prior federal and state law, as he relied on the spirit and principle of constitutional guarantees.

Despite Counselman and a few other votes by Blatchford in favor of civil liberties, Blatchford attracted slight public notice; he was most noteworthy for his businesslike approach and his orderly, prosperous, and placid career.