(b. San Francisco, 15 Aug. 1938), associate justice, 1994–. Appointed to the Supreme Court by President Bill Clinton in 1994 to replace Justice Harry A. *Blackmun, Breyer served as circuit justice for the Tenth Circuit. Educated at Stanford University (1959) and Oxford University (1961), Breyer received his law degree from Harvard University (1964). After serving as a law clerk for Justice Arthur *Goldberg, Breyer held governmental positions in the office of the Assistant Attorney General for Antitrust (1965–1967), as assistant special prosecutor in the Watergate Investigation (1973), as special counsel to the U.S. Senate Judiciary Committee (1974–1975), and as chief counsel to that committee (1979–1980). Subsequently, Breyer became a leading member of the U.S. Sentencing Commission (1985–1989) that developed the sentencing guidelines now in effect in the federal courts. These governmental assignments occurred while Breyer was pursuing his academic career as a Harvard University law professor, where he specialized in *antitrust law, administrative law, economic regulation, and risk management. 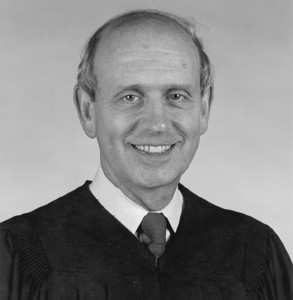 Record on the Court

Appointed to the U.S. Court of Appeals for the First Circuit in 1980, Breyer was known for his intellect, the thoroughness of his preparation, his keen interest in the cases, and his respect for counsel. Breyer became chief judge of the First Circuit in 1990. His wide-ranging interests and deep commitment to his office were manifest, for example, in the special effort he made to understand the Spanish sources of Puerto Rican law, since Puerto Rico comes within the *appellate jurisdiction of the First Circuit. As chief judge, Breyer was a key figure in the (p. 107) design and construction of the new federal court-house overlooking Boston harbor. In his nearly fifteen years of service on the First Circuit, Breyer gained a reputation for outstanding judicial work, earning comparisons to his illustrious predecessor on the First Circuit, Calvert Magruder, a jurist known for his intelligence, fairness, integrity and realism.

One of the nation’s leading thinkers on the subject of deregulation, Breyer is by no means a deregulation ideologue. His major book on the subject, Regulation and Its Reform (1982), is a program for regulatory reform rather than a deregulation manifesto. The book is a detailed analysis of the need for change in such areas as regulatory impact statements, agency accountability, legislative and executive oversight, information gathering, and cost-benefit analysis. Many of the proposals made in Breyer’s book were adopted by presidents and by Congress in the 1980s and 1990s. Given his special expertise in the field of administrative law, it is not surprising that Breyer rendered the decision for the Supreme Court in Dickinson v. Zurko (1999), a patent case that asked if the “substantial evidence” standard of the federal Administrative Procedure Act was the same as the “clearly erroneous” standard used by the federal appeals courts in reviewing the findings of the federal district courts. In reviewing landmark Supreme Court decisions in the field of modern administrative law, Breyer concluded that court/agency review was less strict than court/court review. While Congress had directed reviewing courts to exercise meaningful *judicial review of agency findings of fact and not merely to rubber-stamp such findings, the difference between the two standards was “a subtle one” so that as a practical matter there was no real difference between them. In general, this has meant that the “substantial evidence” requirement in federal administrative law is a reasonableness test not unlike the standard used in the review of most other federal administrative agency determinations.

Breyer’s nonideological approach to judging is also manifest in several cases involving the interface between the *First Amendment and the electronic media. In Denver Area Educational Telecommunications Consortium, Inc. v. FCC (1996) and in Turner Broadcasting System, Inc. v. FCC (1997), Breyer went beyond traditional categorical approaches to First Amendment analysis. He outlined a new balancing approach that recognized the competing interests in freedom of expression on the part of all groups involved in the electronic media such as listeners, media operators, programmers, and local distributors.

One of Justice Breyer’s most controversial decisions was Stenberg v. Carhart (2000), the case where a closely divided Supreme Court struck down Nebraska’s late-term abortion statute. The Nebraska law had no provision protecting the life or health of the mother. Breyer argued that the statute was overly broad and jeopardized abortions using common surgical techniques even in the early stages of pregnancy. Breyer drew upon the landmark abortion case, *Planned Parenthood of Southeastern Pennsylvania v. Casey, decided by the Court in 1992, which prohibited laws that placed an “undue burden” on a woman’s right to choose to have an abortion. Acknowledging the controversial nature of the decision and the fact that millions of Americans believed that life begins at conception, and despite the fact that the Court was closely divided on the issue, Breyer declared that “this Court, in the course of a generation, has determined and then redetermined that the Constitution offers basic protection to the woman’s right to choose” (p. 920).

Equally emphatic in his defense of basic constitutional rights was Breyer’s decision for the Court in Zadvydas v. Davis (2001), a case that involved certain detention provisions of the 1996 Illegal Immigration Reform and Immigrant Responsibility Act (as amended). In this case, the Supreme Court reviewed the authorization to civilly detain aliens who violated Immigration and Naturalization Service conditions beyond a statutory period of ninety days. Since the statute failed to limit this continuous period of detention, confinement could, in some instances, become indefinite in the event that an alien’s country of origin would not permit return or, for some other reason, the alien was nondeportable. Reacting to this possibility of indefinite detention, Breyer held that confinement after six months beyond the specified ninety-day period was presumed to be unconstitutional and a violation of *due process. To overcome the presumption that such indefinite detention was justified, the government would have to make a showing that there was significant likelihood that removal was reasonably foreseeable and that additional detention was required because of the presence of a further set of aggravating circumstances.

In the decade following his appointment, the composition of the Supreme Court did not change. On many issues the Court was divided 5 to 4, and Breyer was one of the moderate minority in most of those cases. As a result, many of Breyer’s most notable utterances from the bench were made in dissent rather than in opinions for the Court. Notable among these was his detailed dissenting opinion in United States v. *Lopez (1995), the first case in almost sixty years to turn back the power of Congress to regulate commerce under Article I of the Constitution. The statute in question, the (p. 108) Gun-Free School Zones Act, proscribed the possession of firearms within certain defined zones in and around schools. The majority held that this was not a commercial problem and, therefore, beyond the powers of Congress under the Commerce Clause. Justice Breyer, in his exhaustively documented dissent, argued that “Congress also could have found … that gun-related violence in and around schools is a commercial, as well as a human, problem” (p. 620). Breyer drew upon the long history of Commerce Clause jurisprudence going back to the bitter struggles over the meaning of interstate commerce at the time of the *New Deal. He reminded the Court that its decision in the case would resurrect the discredited jurisprudence of the 1930s. The dissent is illustrative of Breyer’s consciousness of the importance of history in constitutional adjudication.

Breyer’s pragmatic approach to judging was similarly evident in the case brought by Paula Jones against President Bill Clinton. Concurring in the judgment of a unanimous Court in *Clinton v. Jones (1997), that a sitting president did not have automatic immunity from civil lawsuits, Breyer cautioned that such suits could cause “significant interference with the President’s ongoing discharge of his official responsibilities” (p. 724). Most telling of all was Breyer’s vigorous dissenting opinion in *Bush v. Gore (2000), which effectively put George W. Bush into the White House. Breyer declared that “the Court was wrong to take this case.” Using the historical experience of the disputed election of 1876, Breyer reminded the Court and the nation that the majority’s decision in Bush v. Gore would undermine respect for the judicial process. “What it does today, the court should have left undone,” noted Breyer (p. 156). Breyer’s dissent in this memorable and far-reaching decision showed his respect for *federalism, for Congress, for the political process, and for the Constitution. It was the best expression of his understanding of the limits of judicial power.

In his first decade on the Supreme Court, Justice Breyer established a number of benchmarks to his jurisprudence. In addition to his pragmatism, Breyer is noted for his interest in comparative law and his openness to the legal systems and rights provisions of other nations. He is among those justices willing to cite other fundamental rights documents besides the U.S. *Bill of Rights in deciding individual rights cases. In the debate over the question as to whether legislative history can be used in statutory analysis, Breyer is on the side of those who do not disclaim its importance as an interpretive tool. On issues of federalism, Breyer remains a strong advocate for the role of Congress and the federal government in economic and environmental regulation. And while he is identified with the liberal wing of the Court, Breyer remains a nonideological moderate. He examines each case on its merits and has few fixed positions.

Breyer is a highly visible Supreme Court justice. His is a familiar face on television, particularly on programs having to do with the legal system and the courts. His nonjudicial publication output remains substantial. Breyer continues to speak and lecture widely even on issues of great public controversy such as the trade-offs between counterterrorism and human rights, and the dangers of mandatory minimum sentences for criminal defendants under the sentencing guidelines. In the years ahead, as more issues of scientific and technological change come before the Court, Breyer will undoubtedly play a leading role in the developing complexity of Supreme Court jurisprudence.