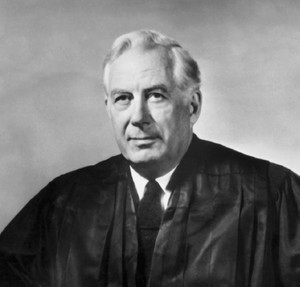 handling corporate, real estate, and probate matters. He was also involved in civic and political activities, most notably as a backer of Minnesota Governor Harold Stassen’s presidential bids. Burger served as Stassen’s floor manager at the 1948 and 1952 Republican conventions, where he won the respect of national Republican leaders. When Dwight Eisenhower became president in 1953, Attorney General Herbert Brownell named Burger assistant attorney general in charge of the Claims Division (later the Civil Division).

From 1956 to 1969 Burger served on the U.S. Court of Appeals for the District of Columbia Circuit, among America’s most influential courts. As a circuit judge, he attracted national attention from the bench and bar for his judicial administration and for his jousts with the civil libertarians on that talented but badly divided court. Moderately conservative in most matters, Burger led the wing of the court that opposed extending the rights of criminal defendants and modernizing the insanity defense, preferring instead to give considerable leeway to police, prosecution, and trial judges.

Burger’s appointment as chief justice by Richard *Nixon became possible after Lyndon Johnson’s nominee, Associate Justice Abe *Fortas, failed to win confirmation. By the time Nixon focused attention on the vacancy (May 1969), Fortas had resigned from the Court following accusations of improprieties. Burger was chosen because of his judicial experience, his opposition to decisions of the Warren Court on criminal procedures, his criticism of judicial activism, and because his career was free of ethical blemishes.

Contrary to expectations, while Burger served as chief justice, the Supreme Court consolidated most of the major initiatives of the Warren Court (such as civil rights and reapportionment), although the pace of change became more moderate. The Court recognized new rights and opened to judicial exploration such areas as *gender discrimination, *abortion, *affirmative action, and welfare rights. Burger was among the least enthusiastic of the justices regarding these trends, but was at the forefront when the Court reversed direction in the criminal area, cut back access of litigants to the federal courts, and demonstrated more sensitivity to traditional principles of *federalism than had Warren’s Court.

Among twentieth-century chief justices, Burger appears to have been considerably less successful in guiding the other justices to jurisprudential results he favored than either Earl *Warren or William Howard *Taft had been. His colleagues William J. *Brennan, Jr., and William H. *Rehnquist were far more influential with their fellow justices, and Lewis *Powell, Jr., in a different way, left a greater imprint on constitutional jurisprudence. Burger was unable to take advantage of his allies within the Court, the relatively quiescent political environment, or the absence for much of his tenure of problems caused by aging or cantankerous justices. Within the Court, he appears to have been more pugnacious than conciliatory. Throughout his tenure, there were leaks to the press—some clearly from his colleagues—indicating dissatisfaction with his leadership. He does not seem to have been successful in managing the conference of the justices, and individual statements of opinion proliferated to an extent not seen since before 1800. Burger himself was less willing than any chief justice except Harlan F. *Stone to suppress his own dissents to preserve the appearance of harmony.

As a judge, Burger was not of the first rank, but his work was much better than contemporary critics allowed and not recognizably different in craftsmanship from that of most of his colleagues. Not a man given to inner agonies, Burger usually was quite clear as to what he thought the law was. His opinions were generally short, fact-oriented, straightforward, and clearly written.

Burger’s opinions of greatest importance are those dealing with *separation of powers. His opinion for the unanimous Court in United States v. *Nixon (1974) rejected Nixon’s claim of *executive privilege and ordered him to turn over tapes of conversations with aides for use in a criminal trial, but also recognized a presumptive privilege for presidential conversations. Generally, Burger’s approach to separation of powers was formalistic, stressing the separateness of each branch and the supremacy of each within its own assigned sphere. He wrote the opinion in *Immigration and Naturalization Service v. Chadha (1983), invalidating the *legislative veto. His final opinion, *Bowsher v. (p. 124) Synar (1986), held the Gramm-Rudman-Hollings budget-cutting law to be unconstitutional because it assigned executive functions to the comptroller-general, who is removable by Congress.

Personally critical of the media and extremely sensitive to press criticism, Burger wrote a number of important opinions upholding *First Amendment claims. Among them were *Nebraska Press Association v. Stuart (1976), in which the Court held that the protection against prior restraints makes the use of “gag” orders in a criminal trial a last resort, and *Miami Herald Publishing Co. v. Tornillo (1974), which invalidated a Florida statute requiring newspapers that had assailed the character of a political candidate to afford free space to the candidate for reply. However, Burger rejected the view that the First Amendment guarantees the press a right of access to sources of information broader than that accorded to members of the general public, the right not to divulge sources to a grand jury, or immunity from police searches. (See also speech and the press.)

Burger was by no means antagonistic to the civil rights heritage of the Warren Court, but he was far more cautious in employing judicial power to force integration. He spoke for a unanimous Court in *Swann v. Charlotte-Mecklenburg Board of Education (1971), which affirmed a district court order to redraw attendance zones and to bus students to achieve a racial mix at each school approximating the racial composition of the entire district. In Bob Jones University v. United States (1983), he rejected a position of the Reagan administration by holding that the Internal Revenue Service has the authority to deny tax exemptions to private schools—even schools run by religious organizations—that discriminate on the basis of race. On the other hand, writing for a closely divided court in *Milliken v. Bradley (1974), he held that even though the Detroit school system was unconstitutionally segregated, the judiciary had no power to order an integration plan that would include suburban schools absent proof that interdistrict segregation was the product of race-conscious *gerrymandering. No enthusiast where affirmative action was concerned, Burger still wrote the opinion in *Fullilove v. Klutznick (1980) upholding congressional power to require 10 percent of the funds in a public works job bill to be set aside for awards to minority businesses.

The nonjudicial aspects of the office of chief justice were well suited to Burger’s abilities and temperament, and to this dimension of his role he brought enormous energy, forcefulness, tenacity, and the willingness to risk controversy. Like Taft, Burger saw his office as a place to promote reform in the administration of justice, and, like Taft, he was a conservative reformer, primarily concerned with the traditional agenda of limiting high costs and long delays. Burger also saw his office as a “bully pulpit” from which to call attention to the problems of *state courts. He had much to do with the founding of the Institute for Court Management, the National Center for State Courts, and the annual Brookings Seminars at which leaders of the three branches meet to discuss problems of judicial reform. He pressed hard but with limited success for reforms in the corrections process but made somewhat more headway in pressing for upgrading the quality of trial attorneys.

During Burger’s tenure, new technologies, from copying machines to computers, were installed in the Court’s offices, its personnel practices were overhauled, and a small central legal staff was created. The Court was also made more accessible to scholars and the public. Burger was unsuccessful in persuading Congress either to create a temporary national court of appeals to offer some relief to the Supreme Court or to increase federal appellate capacity (see judicial power and jurisdiction). Although the time spent on these efforts and the ceremonial aspects of his office may have undermined Burger’s leadership on the Court, no one could gainsay the deep commitment he brought to his work, his profound desire to measure up to his predecessors, or the fondness with which he was regarded by his staff. Deeply concerned about the importance of educating the public about the Constitution, Burger retired as chief justice in 1986 to give full time to his position as chairman of the Commission on the Bicentennial of the U.S. Constitution. He undertook no further judicial work after he left the bench.

See also chief justice, office of the; history of the court: rights consciousness in contemporary society.