(b. Cincinnati, Ohio, 15 Sep. 1857; d. Washington, D.C., 8 Mar. 1930; interred Arlington National Cemetery), president of the United States, 1909–1913; chief justice, 1921–1930. William Howard Taft, the only figure in American history to serve both as president of the United States and chief justice of its highest court, was born in Cincinnati on 15 September 1857, the son and grandson of judges. Ample in girth as well as intellect, he possessed amiability rather than political ambition. Taft was attracted not to politics, but to law in general, and judging in particular, throughout his long and varied career. Though capable as a lawyer, he achieved his greatest fulfillment as a judge. He served in a number of political capacities, including the highest political office in this country, but his calling remained the judiciary. “I love judges, and I love courts. They are my ideals, that typify on earth what we shall meet hereafter in heaven under a just God.” And toward the end of his life, when, after losing reelection to the presidency, he ultimately attained his lifelong goal of the chief justice’s seat on the Court, an observer described him on the bench “as one of the high gods of the world, a smiling Buddha, placid, wise, gentle, sweet” (J. Anderson, William Howard Taft, 1981, p. 259).

Taft graduated from Yale in 1878, and after attending the University of Cincinnati law school, was admitted to the Ohio bar two years later. But his private practice was a short one. The son of a family well known in Ohio politics, he was appointed to the Ohio Superior Court in 1887. Within two years, he tried to have his name submitted to President Benjamin Harrison for a vacancy on the United States Supreme Court. Although he did not receive the appointment, the influence exercised on his behalf was sufficient for Harrison to name the thirty-two-year-old Ohio judge as *solicitor general. The required relocation to Washington afforded Taft the opportunity to meet lawyers and political figures on the national scene. Taft was not an eloquent advocate, but his performance as solicitor general was more than competent; he won sixteen out of the eighteen cases that he argued before the Court. In 1892, Harrison appointed him a federal judge for the Sixth Circuit. 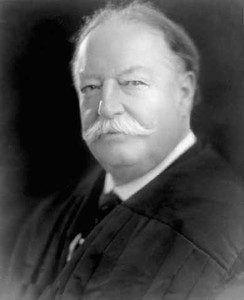 Taft served on the circuit bench for eight years. Many of the cases before him concerned organized *labor. Throughout his later career, especially during his presidential term, Taft would be severely criticized for his hostility to the working man. In fact, examination of his federal judicial career indicates ambivalence rather than outright antagonism toward labor. He had no doubt, for example, that workers had the right to organize into unions and strike when they considered it necessary. Moreover, he ruled in one case that it was unlawful for owners to force their workers to accept nonliability clauses as a condition of employment, a device popular among employers for avoiding liability for accidents. Taft’s ruling was later reversed by the Supreme Court.

(p. 998) On the other hand, a strike was not the same thing as a boycott; Taft regularly enjoined the latter. While he occasionally supported the workers’ position in a particular case, he remained staunchly conservative in his attitudes toward *property rights. And, like many conservatives, he reacted with outrage to violence resulting from conflict between labor and management. During the Pullman strike in 1894, Taft wrote to his wife that “it will be necessary for the military to kill some of the mob. … They have only killed six … as yet. This is hardly enough to make an impression.”

Taft found his years as a federal judge extremely fulfilling. There was always the possibility of advancement to the high court, a goal not shared by Taft’s wife, who consistently urged her husband to venture into fields with greater potential for political rewards. When in 1900 President William McKinley named him chair of the Philippine Commission, pressure from Helen Taft, rather than his own preference, proved persuasive. He remained in the islands for four years, ultimately serving as civil governor, a position that he considered similar to his earlier judicial functions. So absorbing did he find his island responsibilities that on at least two separate occasions between 1901 and 1904, Taft declined appointments to the Supreme Court, choosing instead to remain in the Philippines. Finally in 1904, President Theodore Roosevelt recalled him to Washington as secretary of war. His close association with the president, together with Helen Taft’s vigorous encouragement and Roosevelt’s stated determination not to seek reelection in 1908, all combined to propel a reluctant Taft into the White House.

Had Roosevelt been able to offer Taft the position of chief justice, subsequent events might have been very different. Neither interested in politics nor astute in the ways of politicians, Taft found his four years as chief executive a frustrating and unrewarding experience. He was, however, able to make six appointments to the Supreme Court, more than any other one-term president in American history. He even named a new chief justice in place of Melville *Fuller, commenting with real regret that “the one place in the government which I would have liked to fill myself I am forced to give to another.” Indeed, Taft’s self-interest in this matter colored his conduct.

Ultimately faced with two choices, both justices currently on the Court, either Edward D. *White or Charles Evans *Hughes, Taft ultimately named White, even though White was a Democrat, and though Taft respected Hughes more as a judge. But White was a dozen years older than Taft, and seventeen years older than Hughes. Refusing to abandon his goal of ultimately serving as chief justice, Taft realized that given the vicissitudes of time, he might yet have a chance of succeeding White. Actuarial considerations may thus have been the dominant factor in White’s ultimate selection.

Taft expected defeat in the bitter three-way 1912 presidential campaign and left the presidency to Woodrow Wilson with relief. Offered the Kent Chair in Constitutional Law at Yale Law School, Taft commented jocularly that a chair would not be adequate, but perhaps “a sofa of law” might suffice. He adjusted to the life of an academician with an extensive and, for the time, lucrative lecture schedule. He remained interested in national affairs and strongly endorsed Wilson’s League of Nations, even as he severely criticized the embattled president’s political intransigence. Always a loyal Republican, he supported Warren G. Harding with consistency if not enthusiasm. After Harding’s triumphant election, the new chief executive offered to place Taft on the bench, but the former president replied that he would only accept the position of chief justice.

With an eagerness to succeed his own nominee as chief justice that was understandable if not unseemly, Taft might have pondered Thomas *Jefferson’s famous lament about justices on the high court: “few die and none resign.” Although he had a few anxious months owing to Chief Justice White’s seeming longevity, ultimately Taft’s calculations concerning the length of the chief’s term were correct. To some extent in 1908, but even more so in 1921, Taft happened to be in the right place for the right position with the right president at the right time. Nominated chief justice by Harding on 30 June 1921, the former president was confirmed later that same day by the Senate, which did not even bother to refer the matter to committee.

As chief justice, Taft was distinguished less by doctrinal than by departmental innovation. Especially in the first half of his nine-year term, while he remained in relatively sound health, he was the most active chief justice in court administrative matters thus far in the history of that tribunal. Taft did not hesitate to use many of his old presidential and congressional contacts to further his goals for the Court. His skillful combination of informal lobbying, matched with a sound understanding of the needs of the federal judicial system, led to congressional enactment of the *Judiciary Act of 1925, which gave the justices almost total discretion over their docket. This discretionary flexibility continues to the present, allowing the Court, with very few exceptions, to decide what cases need to be resolved and in what context. Later, Taft employed these same skillful techniques to insure congressional support (p. 999) for the construction of a building appropriate to the Court’s role in American constitutional adjudication. He did not live to see it completed, but the structure remains one fitting tribute to Taft’s vision of the Court.

As chief justice, Taft emphasized teamwork among his associates. He did not appreciate frequent dissents (especially those replete with lengthy footnotes that seemed to emanate too often from Justice Louis *Brandeis) because he thought they lessened the effectiveness of the Court’s work. His reluctance to see disagreement within the Court made public is reflected in the fact that in his eight full terms he dissented about twenty times and submitted written dissents in only four cases. Yet he wrote 249 opinions on behalf of the Court.

Taft’s conservative tendencies demonstrated during his first judicial career were very much in evidence during his second. In 1921, speaking for a bare majority of the Court, he struck down an Arizona statute that limited use of injunctions during labor disputes. Conduct that strikers claimed to be sanctioned by the statute was, according to Taft in *Truax v. Corrigan (1921), “moral coercion by illegal annoyance and obstruction, and it thus was plainly a conspiracy” (p. 328). Less than six months later, he held a federal statute dealing with child labor unconstitutional. Earlier, Congress had enacted a similar law, based upon its power to regulate commerce, only to see it struck down by the Court (see commerce power). Its second attempt was based not on the Commerce Clause, but rather on the taxing power; yet Taft saw no difference worth discussing (see taxing and spending clause). In reality, the act was a penalty, Taft concluded in *Bailey v. Drexel Furniture Co. (1922), because in seeking “to do the same thing, and the effort must be equally futile” (p. 39).

Taft was nevertheless capable of unusual doctrinal flexibility. In one of his rare dissents, he criticized the majority’s rejection of a minimum wage for women. Sounding more like Justice *Holmes than himself, Taft wrote in *Adkins v. Children’s Hospital (1923), “it is not the function of this Court to hold congressional acts invalid simply because they are passed to carry out economic views which the Court believes to be unwise or unsound” (p. 562). When the Court unanimously rejected a congressional attempt to regulate commodity futures trading through the taxing power, in the course of his opinion, Taft advised Congress to reenact the measure based on its plenary authority to regulate commerce. Congress did so, and with the sections regulating futures trading still intact, Taft upheld the law. Indeed, Taft’s opinions for the Court dealing with the national commerce power tended to be sweeping in their endorsement of congressional authority. If they represented a conservative viewpoint, it was a dynamic conservatism—restricted only by Taft’s insistence that the “sanctity and inviolability of judicial decisions” from his court be unimpaired.

By 1928, Taft’s health was failing. Although he sat in his accustomed chair for the opening of the 1929 October term, illness forced him to resign in February 1930. He died barely a month later and was the first president to be buried in Arlington National Cemetery. If not a distinguished judge in his doctrines and opinions, Taft was an outstanding judicial administrator. Especially in the first half of his term, no chief justice thus far in our history matched his active role in court administration, and his leadership in bringing about legislation gave needed judicial discretion to the Court to control its docket. Taft’s leadership helped modernize a tribunal badly in need of such change. In retrospect, however, too often his decisions reflected a fear of change rather than its necessary facilitation.