(b. Marion, Ind., 17 Apr. 1859; d. Washington, D.C., 8 Feb. 1941; interred Rock Creek Cemetery, Washington, D.C.), associate justice, 1910–1937. Willis Van Devanter, one of the *Four Horsemen, graduated from the University of Cincinnati Law School in 1881. After three years in his father’s Marion, Indiana, law firm, he moved to Wyoming, where he quickly became involved in public life: first as city attorney of Cheyenne and as a territorial legislator and then as chief justice of the territorial court. When Wyoming became a state, he returned to private practice, counting the Union Pacific Railroad among his clients. Van Devanter’s involvement in Republican party politics led to his appointment as assistant attorney general in the Department of Interior in 1897. President Theodore Roosevelt appointed him to the Eighth Circuit Court of Appeals in 1903, and seven years later President William Howard *Taft chose him to replace retiring Supreme Court Justice William *Moody.

Van Devanter was considered the foremost intellectual conservative on the court during his twenty-six-year tenure. His service was distinguished primarily by his performance in the *conference and as a critic of his colleagues’ opinions. His knowledge of jurisdictional matters also led Chief Justice Taft to choose him to play a leading role in drafting the *Judiciary Act of 1925 and testifying before Congress on its behalf. 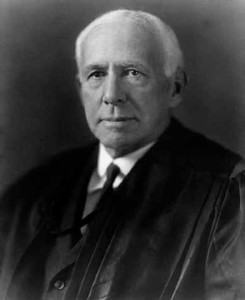 Never a prolific writer, Van Denvanter made his legal contributions in obscure areas of the Court’s docket: public land claims, water rights issues, Indian controversies, corporate law, jurisdictional issues, and admiralty law. His most important majority opinion was McGrain v. Daugherty (1927), in which he broadly interpreted the *implied power of Congress to conduct investigations. Congress, he said, had the power to investigate and to issue *subpoenas even without an explicitly stated legislative purpose. Aside from McGrain, Van Devanter is known primarily for the opinions he wrote or joined that subscribed to the principles of limited government. His opinion for the Court in Mondou v. New York, New Haven, and Hartford Railroad (1912) upheld the Employees’ Liability Act of 1908, because it was restricted to the Court’s prevailing view that congressional power was limited to interstate commerce itself and to actions that directly affected that commerce. Van Devanter was, however, fiercely opposed to the use of the *commerce power, along with the taxing power (see taxing and spending clause) and the Due Process Clause to regulate industry and labor-management relations. He joined Justice William *Day in *Hammer v. Dagenhart (1918), Chief Justice Taft in *Bailey v. Drexel Furniture Co. (1922), and Justice George *Sutherland in *Adkins v. Children’s (p. 1046) Hospital (1923) in striking down federal child labor and state minimum wage legislation on commerce, tax, and due process grounds.

These decisions and *Schechter Poultry v. United States (1935), which condemned the National Industrial Recovery Act, precipitated a constitutional crisis. In response to FDR’s *“court-packing” plan, the Court retreated. Chief Justice Charles Evans *Hughes and Justice Roberts joined Justices Louis *Brandeis, Harlan Fiske *Stone, and Benjamin *Cardozo to uphold federal and state legislation over dissents by the Four Horsemen. In his dissent in *National Labor Relations Board v. Jones and Laughlin Steel Corporation (1937), Van Devanter, joined by Sutherland and Butler, argued that federal regulation of labor-management relations violated the Commerce Clause because the effect on interstate commerce was indirect and remote. In *Steward Machine Co. v. Davis (1937), Van Devanter agreed with Sutherland that the Social Security Act of 1935 exceeded the congressional taxing power. Sutherland’s opinion for all Four Horsemen in *West Coast Hotel v. Parrish (1937) also expressed Van Devanter’s firm conviction that the state minimum wage statute offended the Due Process Clause. In subsequent cases, Van Devanter’s fellow conservative justices continued to resist the Roosevelt revolution, but these three decisions and his retirement at the end of the 1936 term resolved the Court’s confrontation with the New Deal.