a private meeting of the justices of the Supreme Court of the United States. During the Court’s annual term, beginning in October, the justices meet as a group twice each week to screen petitions for review of new cases, to deliberate cases currently on the Court’s docket, and to transact miscellaneous Court business.

At the sound of a buzzer, the justices assemble in the Court’s panelled Conference Room, under 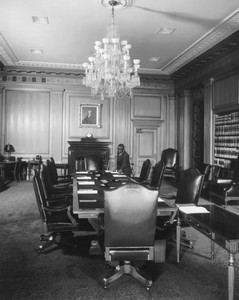 (p. 202) a portrait of Chief Justice John *Marshall. After a handshake, each justice takes a preassigned seat around a long table with the *chief justice at one end, the senior associate justice at the other, and the remaining justices along the sides. No clerks, secretaries, or visitors are permitted behind the closed doors once a conference has begun.

In recent years, conferences have been scheduled for Wednesday afternoons, during which the justices deliberate the four cases orally argued the previous Monday. Typically, the Court meets again for a full-day session on Friday to discuss the eight cases argued on Tuesday and Wednesday. This schedule has varied, however, throughout history. In the Court’s early years, conferences were scheduled in the evening or on weekends, often in the boarding houses or hotels shared by justices while in residence in Washington. Until 1955, the Court conferred on Saturdays to discuss all cases argued the previous week.

While meeting times have varied, the basic agenda of a typical conference session has remained constant for some time. The chief justice presides, allowing a brief period for consideration of the petitions for hearing (*certiorari petitions) on the Court’s *”discuss list.” This list includes all petitions deemed worthy of full-dress treatment by any justice. If four justices agree to review a case, it is then scheduled for briefing and oral argument. The chief justice initiates discussion of a petition with a statement as to why he feels it is worthy of consideration on the merits. In order of seniority on the Court, the eight associate justices may then comment.

Following discussion of matters relating to the Court’s docket and of any miscellaneous items and motions awaiting the attention of the justices, the chief justice moves on to the deliberation of the cases argued before the Court in the previous few days. Customarily, the chief justice frames the discussion of a case with a review of its facts and mention of its history and of relevant legal precedent. In descending order of seniority, the remaining justices present their views.

In the past, a vote was taken after the newest justice to the Court spoke, with the justices voting in order of ascending seniority largely, it was said, to avoid pressure from long-term members of the Court on their junior colleagues. By contrast, recent practice suggests that the initial comments of each justice carry an indication of that individual’s vote, making a separate vote unnecessary in most instances. After everyone has spoken, the chief justice announces his vote tally before moving on to the next case.

Since the justices jealously guard the secrecy of their conferences, no formal records of these meetings are kept. However, many of the justices maintain personal notes summarizing the discussions to assist recall of particular conferences. Court watchers have been able to reconstruct the general tenor of past conferences by tapping these notes as they are made public, frequently years after the justice’s death. Researchers also have been aided by occasional off-the-bench remarks and publications of justices.

These judicial materials suggest that the atmosphere of conferences can vary considerably, depending on the attitudes and style of the presiding chief justice, the personalities of the associate justices, and the complexity and emotional content of the case at hand. Overall, conference notes suggest that the justices are generally both cordial and frank. But the occasional acrimonious interchange over a particularly divisive case justifies Chief Justice William *Rehnquist’s assessment of the conference mechanism as a “relatively fragile instrument.”

Rehnquist has made it clear that he prefers a businesslike conference in which each justice speaks in turn, uninterrupted. In his The Supreme Court: How It Was, How It Is (1987), the chief justice notes, “the true purpose of the conference discussion of argued cases is not to persuade one’s colleagues through impassioned advocacy to alter their views, but instead by hearing each justice express his own views to determine therefrom the view of the majority of the Court.” (p. 295).

Other twentieth-century chief justices have adopted contrasting styles during their stewardships of the Court’s conferences. During the 1930s, for example, the respect accorded to Chief Justice Harlan Fiske *Stone’s formidable memory, analytic skills, and managerial talents allowed him to tightly control discussion and to move the group along at a brisk tempo. However, some of his associate justices at times complained that the Stone style discouraged important interchanges. Between 1953 and 1969, Chief Justice Earl *Warren’s personal disposition and desire for consensus typically encouraged a more unstructured discussion of agenda items. In any event, the unlimited give-and-take that commonly occurred in the nineteenth century has disappeared with the growing case load faced by the modern Court.

Although the conference remains a critical stage in the Court’s decision-making process, the limited opportunity for extended discussion of cases at conference has increased the importance of subsequent, informal judicial interaction. A justice’s thinking about a case, and even his (p. 203) or her vote, may change in the ensuing weeks and months, while opinions and memoranda are drafted and informal discussions continue. During that period, the justices may negotiate for the wording of passages in a yet-to-be-published opinion or suggest a new approach to the legal issues presented by a case. In sum, the deliberation that began at conference continues in a variety of informal ways until the Court announces its decision in a case, often many months later.