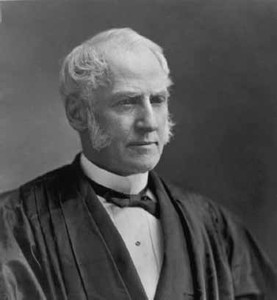 (p. 481) After serving one term in the New York Assembly (1838), Hunt was elected mayor of Utica (1844) and helped organize the Republican Party in New York. His ambitions, however, were for judicial office.

In 1865, after several unsuccessful attempts, Hunt was finally elected to the New York Court of Appeals, succeeding Denio. With the backing of Samuel Hoar and Roscoe *Conkling, he was considered by President Ulysses S. Grant the ideal candidate to succeed Justice Samuel *Nelson to a seat on the U.S. Supreme Court. Hunt was appointed in late 1872 and confirmed within a week.

Hunt’s tenure on the High Court is noted for only a few outstanding opinions and no judicial doctrines. He customarily joined his colleagues in ruling against claims advancing the rights of blacks. But a notable exception was his lone dissent in United States v. *Reese (1876), in which he supported the constitutionality of the 1870 Enforcement Act guaranteeing African-American suffrage. Writing for the majority, Chief Justice Morrison R. *Waite gave a narrow interpretation of voting rights under the *Fifteenth Amendment. Hunt, however, interpreted it as guaranteeing “the right to vote in its broadest terms” for all citizens in all elections, state as well as federal. In this case, the majority refused to sanction federal interference with acts of individual state officers who had refused in their own capacity to allow blacks to vote. For Hunt, it was obvious that such individual acts were tantamount to *state action and subject to federal restraint. In the wording of the Fifteenth Amendment, “state,” Hunt maintained, included “the acts of all those who proceed under a [state’s] authority.”

The majority decision in Reese was more typical and reflected a growing national desire for reconciliation between the North and South. This would inevitably lead to the abandonment of national protection for the freedmen’s *civil rights. Acknowledging this turn of events, Hunt recognized that the majority’s decision “brings to an impotent conclusion the vigorous amendments on the subject of slavery.” Later in that term, he silently acquiesced in the further emasculation of the Enforcement Act in United States v. *Cruikshank (1876).

Unfortunately, Hunt’s transitory concern for guaranteeing African-American suffrage did not extend to women. He presided at the 1873 United States Circuit Court trial of Susan B. Anthony, who claimed the right to vote under the *Fourteenth Amendment. She had had the temerity to vote in the 1872 presidential election in New York, despite a state constitutional requirement that limited the franchise to men. Anthony claimed that the state had denied her rights under the amendment’s clause guaranteeing the *privileges and immunities of all citizens. Hunt flatly denied the argument and in his opinion he distinguished between the rights of citizens of the states and of the United States. He followed the reasoning of the contemporaneous *Slaughterhouse Cases (1873), ruling that such regulations, however unjust, fell under the absolute domain of the state. Hunt ordered a guilty verdict, refused to poll the jury, and fined the plaintiff $100. The sentence was never enforced, and no appeal was ever made to the Supreme Court.

Hunt, by all accounts, was a hard working judge when in good health, and an able craftsman during his brief career on the Supreme Court (1873–1882), but he seems to have had little apparent influence on the views of his brethren or on the development of constitutional law. His opinions, although not brilliant, were clearly written and well researched. He sided consistently with the Waite Court majority in upholding bondholders’ claims, state regulations in traditional *police power decisions, and claims of immunity from federal taxation for states or their instrumentalities. In one of his first opinions, he declared municipally financed railroads to be state agencies and therefore similarly exempt. A few years later he dissented in Pensacola Telegraph Co. v. Western Union Telegraph Co. (1877), in which the majority maintained that states could not interfere with telegraph lines established under federal law. Hunt, however, insisted that federal authority extended only to lands within the public domain.

Failing health caused him to miss a number of Court sessions in 1877, and a month after the Court adjourned in December 1878, Hunt suffered a disabling stroke. However, he refused to resign his seat. Having served for less than the ten years required to make him eligible for a pension, he delayed stepping down until he was assured of the help of his former colleague on the bench, Justice David B. *Davis, who was by then a senator from Illinois. Senator Davis introduced a special retirement bill for Hunt, and the justice resigned his Court seat the day the bill passed (27 January 1882).

Rated by scholars in a 1971 survey as only “average” among all Supreme Court justices, Hunt may have been unexceptional but he was not insignificant. While on the bench, he remained a politically loyal Grant appointee. He wrote the opinion of the Court in 149 cases, authored four dissents, and dissented without opinion in eighteen cases. He was twice married—in 1837 to Mary Ann Savage of Salem, New York, by whom he had two children, and in 1853 to Maria Taylor of Albany. He never recovered from the stroke that had paralyzed his right side and remained an invalid until his death in Washington, D.C., on 24 March 1886.